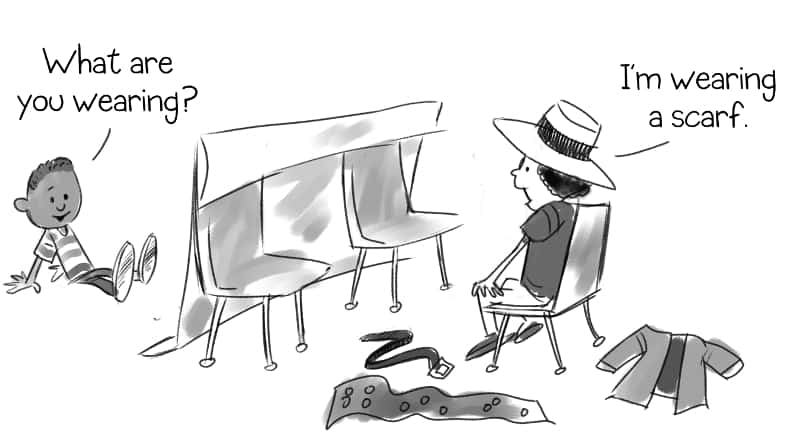 This post has a fun ESL speaking activity for all class sizes.

Now that you have a barrier, here is an example of the game in action with clothing vocabulary. A child hides behind the blanket and puts on a selection of clothes. The best items are hats, belts, ties, or scarves because they are quick to put on. Next, the class asks in unison, ‘What are you wearing?’ The person behind the blanket replies, ‘I’m wearing a hat’ or ‘I’m wearing a red hat.’

Each student decides whether they think this is true or false, and whoever believes it is true stands up; whoever thinks it is false sits down. Now the person behind the blanket reveals whether or not he is wearing a red hat. (If you don’t have real clothes, or if this is too time-consuming use pictures.) However, if a red hat is correct, then all those who sat down are out. Those left  standing are still in the round. If it’s not a red hat but a black coat, those standing up are out and sit down. Finally, those sitting down, who are still in, stand up again for the next round.

Next, swap over the person behind the blanket for another round. Only allow that pupil a few seconds to dress up so that the others are not bored waiting. The class can count up to 20 or say the alphabet while the person puts their prop on. Of course, dressing up is only one idea for this game. It could be played with animals, with the question being ‘Do you have any pets?’ or hobbies and so on.

Another way to use this ESL speaking activity is for each pupil to hold up a paper with either ‘true’ or ‘false’ on it. Everyone starts the game standing up. Next, the person behind the blanket chooses whether or not to wear the red hat, and students hold up either a true or false card. (A tick and a cross would be easier for younger children.) Finally, everyone who was wrong sits down and stays seated during the next rounds until only a few students are standing.

To practise vocabulary, place two pictures (or word cards) on the floor behind the blanket; for example, a picture of a plane and a truck. A pupil chooses between the two images and stands on one. Then, the pupil says either ‘truck’ or ‘plane.’ The others guess whether it’s true or false as described above. To practise grammar, insert the vocabulary into sentences like ‘I’m going to Paris by plane.’

If the class is fairly big, there will not be time for everyone to go behind the blanket. So, to speed up the process, say ‘Ready, go!’ and the others call out the picture they think is correct. This way, everyone has a chance to say the words, rather than just the person behind the blanket. Students award themselves points if they are correct. Of course, some children will cheat and pretend they said the right word, but does it matter? After all, we want them to speak English and enjoy it. Therefore, I suggest pretending not to notice!

Variants to work on questions

We might as well use this ESL speaking activity to the full and play another game while the blanket is out. First, put one class member behind the blanket, along with a few picture or word cards. Next, display three or cards for younger children and up to twelve for older children. The words should all be on the same theme.

To make the game easier, display a set of all the vocabulary to serve as a prompt. However, avoid that with older children because it takes some edge off the game. Too easy, and it’s boring, too challenging, and students are defeated! Allow the child behind the blanket five seconds to select a picture to stand on. They now cannot move from that spot. See below for how to continue depending on whether the class is large or small.

Each student, in turn, asks a question and hopes to be the one to guess correctly. For example, the first student asks, ‘Do you have a car?’ Answer: ‘No, I haven’t.’ The second student asks, ‘Do you have a plane?’ and so on until the answer is ‘Yes, I have.’ Give points if you wish. Adapt this game to ask any questions. Choose a question form and then pick vocabulary that fits.

A lively version of the game for small classes

Here is a livelier variant of this game for smaller classes: One child goes behind the blanket, and the others say a rhyme, quickly and rhythmically. It helps if everyone claps on words in bold. For example,

By the time the class reaches ‘three,’ the person behind the blanket must be standing on a card. After students have said ‘three,’ they call out any word, trying to guess the correct one.  Students may call out their guesses individually or together.

As soon as the child behind the blanket hears the correct word they jump out, and all those who called out that word award themselves a point (mass cheating will take place, no doubt – not to worry). The next child to go behind the blanket heads over there while the class immediately start up the rhyme again.

Invent a rhyme to drill the vocabulary, sentence, or question structure you need to teach. Here is an example:
Travel on a bus
Travel on a train
Ride on a bicycle
Fly in a plane

To make the game more challenging, put up to twenty words behind the blanket. The pace should be fast and exciting, with no time in between rounds. Picture prompts on the board will help keep the pace moving. When played well, this game is noisy and fun, and pupils have a chance to repeat the same words many times so they remember them.

My fun classroom games books for kids are available in paperback from Amazon and as downloads from me. The first two featured below are for kids learning English. The ESL Online Games book does all ages from six to adult.