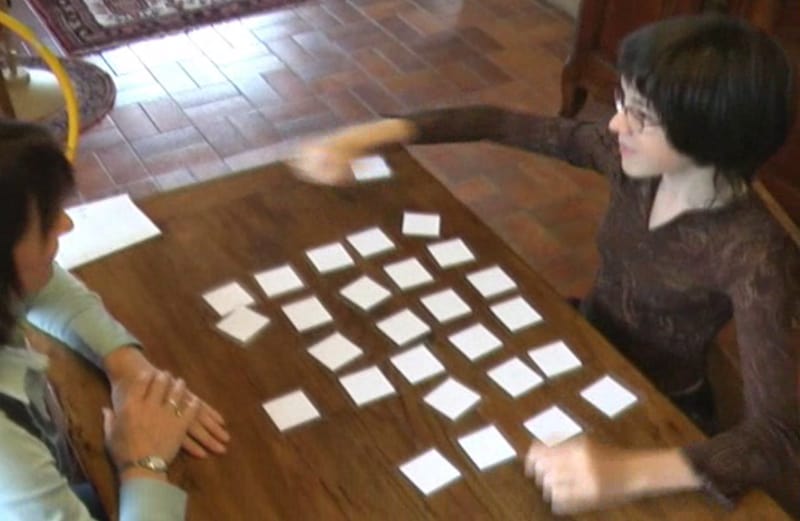 For owners of Teach Your Child English

This video is private, for owners of my ESL Tutoring games book “Teach Your Child English.”

Watch Shelley teaching Julie using English tutoring games. Shelley tutors Julie with a variety of games to show you how versatile they are and how easy they are to use. With a few pieces of paper and pictures, you have access to many ESL tutoring games to help your child learn English effectively while having fun.

Here is an hour-long video showing different games in action. I have only tutored Julie once before, though we know each other well, so she is already comfortable in my company. I feel this lesson goes very well, especially considering it’s the first time Julie has played any of these games.

Play this with objects, pictures, or words. See how I correct Julie when she says “We likes” by repeating “We likes?” with a questioning tone, so she knows it’s wrong, and she instantly corrects herself. When Julie says, “It likes apple,” she misses the “s” on apples. However, I choose not to correct her but to repeat the phrase twice, clearly saying the “s” on apples, so at least she’s heard the correct version. I can’t say that my way of doing things is the only way. Of course, it’s my personal preference not to correct everything because I’ve seen the effect that can have on a student’s confidence.

Unfortunately, Julie lost both rounds of this, so I didn’t manage that very well. The first time Julie answers questions, and in the second round, she also has to ask them. This game is for fluency rather than drilling for accuracy, so don’t correct mistakes; however, help out if you need to to keep the ball rolling.

Julie prepares some words for me to figure out, which allows her to think about spelling. We are going to race each other unravelling our words. She wins all the time because I gave her words that we were working on in our lesson the day before, whereas she gives me any word that she can think of. I use a paper clip to keep the letters together to save time. I beat Julie the first time as she has the b upside down, and it looks like a q. Then she beats me hands down! Next time I play that with her, I won’t make it so easy!

When Julie hesitates, I give her a clue, which is inaudible in the film, telling her there’s a word there that is an item of clothing. We play till the bomb stops ticking. What I’d do in a typical lesson, rather than a video demo, is play three rounds of this, making a note of how many words we find as a team and seeing if we do better each time. There’s no point even trying to play this as a competition as you will always find more words than your pupil.

You can’t see this rapid demonstration too clearly on the film, but you’ll figure it out if you read the game instructions as well. Julie beat me far too quickly, so in a real lesson, I’d play again and not put myself at such a disadvantage. When games are a bit closer, it’s more fun. You tweak this kind of thing depending on your child and how they react to winning and losing. For example, younger children hate losing, but older ones can handle it, but they don’t want to lose all the time. Therefore, wangle it so that they win most of the time.

We’ve never played this before, so we take a few goes to figure it out. I’ve left everything in, so you see one way to handle things when a game does not go well. After trying for a few goes, I simplify it where it’s always the same person asking the question so we can get into a rhythm. That’s often the solution if a game is not working: SIMPLIFY. Then I think up a variant with the hand slapping, which goes well right from the start.

Julie has to say one word to my two. See how I leave the obvious words to her, especially with colours.

I also used this game in Anna’s lesson. Here’s another example of how to play it. Clapping is another fluency game, so it’s not a time for corrections. We don’t play for long, as we are only doing a demo for you. At first, it’s hard to coordinate the language and clapping, even for native speakers! Therefore, it’s a good idea to allow a whole clapping sequence between each speaker to give time to think of something. Otherwise, it’s challenging to keep up the rhythm – even I couldn’t do it, and I’m English!

The game went well, especially considering it’s the first time we played it. Julie has some counting revision at the end totalling her points.

Julie’s a bit old for this game, but it’s still useful for listening to directions/commands. Younger children will get more of a kick out of it. That said, I have played it with adults, who loved it!

This activity was an experiment as I had never played Duck Duck Goose with only one person before. It will work well with a younger child. I think this would work better by getting rid of the chairs, which slowed us down too much. I would try it with big cushions on the floor or racing to throw ourselves on the sofa when we get to “fox.” Have fun experimenting with the idea!

We used this game for descriptive words and their order, for example, “big, brown lions.” However, you may use it for any language and even with word cards. (It’s better with pictures to learn vocabulary and words for spelling.) Alternatively, try mixing images and words; just make sure all cards are the same size. This game is a language drill, so it’s good to correct things here.

After the first round, I prepared to make it harder, but Julie said no, so I threw in the “time bomb” device to add some spice. We would have played again in a real lesson, but I wanted to demonstrate as many ESL tutoring games as possible in the time available. So play it for longer if an activity is fun, but don’t wear it out. That way, it will still be fun at future sessions.

The paper we consult during this game tells us which letter corresponds to the playing card. So on our chart, 1 corresponds to the letters C and D, 2 is E and F, and so on – see the game description for details. When I turn over cards, I try not to say the most obvious word. So, for example, when I turn over a 9, which corresponds with S and T, I don’t say “two” or “table” – easy words I leave for Julie. Instead, I say “Titanic.” Of course, if I’d been with a four-year-old child, I would not have said “Titanic” as a four-year-old would not know that film or historical event. So try to say things relevant to your pupil as much as possible.

I use this game to mention some new words to Julie, which she can understand from my mime or because they are close to French. English and French both stem from Indo-European, so some words are similar. You won’t have this advantage if you are teaching an unrelated language. And if so, you might not want to be so adventurous with your choice of words but pick ones your pupil is already familiar with, or use lots of mimes to make any meanings clear.

I start to spell a word, and Julie has to name it. She gets 100 points if she guesses on the first letter, 50 on the second, etc. Notice how I give her words that I know she knows, like those we covered in the Ready Steady Go lesson or the lesson today. I noted that Julie could use some work on the alphabet, so I’d do that in a future class.

Julie gets the first word so quickly that I change the rules, so she has to get three words before the hangman is complete. I give her easy words I’m sure she knows and two words we’ve covered today: rabbit and gloves. As she got the first two so fast, I changed the rules again and did not give her a clue for the third letter. Like Guess the Word above, Hangman gives Julie some well-needed work on the alphabet.

Prepositions: (48:56) You don’t need those same sticks with coloured stripes to play this. See the game description for an idea using playing cards instead, still practising prepositions. I pull the sticks out as it slows me down and gives Julie the edge. During the game, Julie has an idea for a variant. Always be ready to try out your pupil’s ideas as it’s a great way to learn new ones that way and find out what your pupil finds fun.

Don’t hesitate to contact me if you need help using my ESL tutoring games. I am here to help you successfully teach your child or pupils.

If you are teaching online I recommend ESL Online Games. That book handles tutoring, groups and classes, all online.

If you are face to face, I recommend my skits for children or teens.

Should you prefer paperbacks, please check out my Amazon Author page. But if you think Amazon are rich enough already, get my download version !