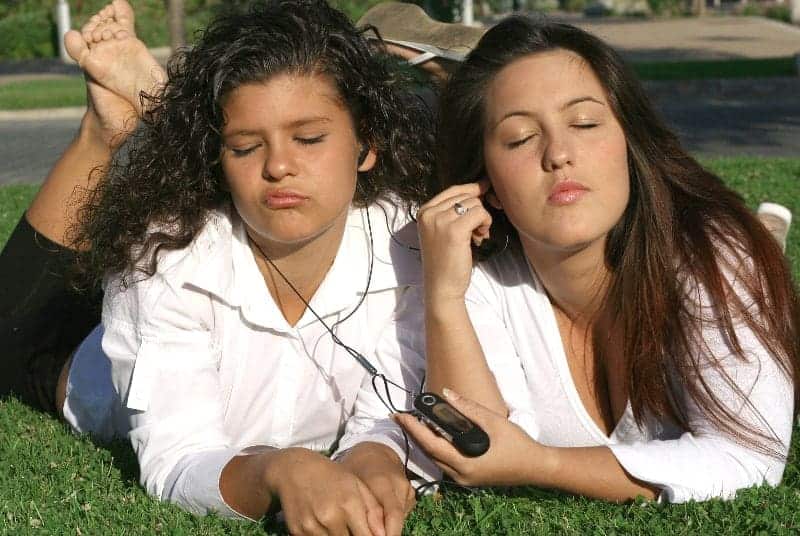 Teens love listening to their music

You’d think that it would be easy teaching with songs since teens love listening to music. But it isn’t!

Golden rules for teaching with songs

Students should choose the songs

Firstly, have each student choose a song for homework. Give students your criteria: the song must be in English and contain no vulgar language. Next, students bring the song lyrics and music to class. Lyrics.com is a useful site to share with students.

If students choose the music, they will feel more involved in the lesson. Plus, you’ll save hours of your free time searching. Also, at least they will like the music because they might think the Rolling Stones should have retired by now! (That’s if they are not already dead.) See the comments box below this blog for some suggestions – and feel free to add yours, with thanks.

Vote on the best songs

In the lesson, students write their song title on the board. Several students will likely choose the same song, but that’s no issue. Have the class vote on the best one, the second-best, and finally the third-best. These are the three songs you will work on in detail. Next, delete all the other song titles.

In groups of three or four, students choose a song and translate it. Allow dictionaries.

You might want to split up students who always chat together.

Make sure that all three songs are being translated by at least one group.

Display the lyrics to the first song. One group presents this first song, describes what it is about, and reads a translation. Check all students in the class agree with the translation. Repeat this for the second and the third songs. If the pieces are very long, do the first couple of verses and chorus.

Show the lyrics to song one and play it. Tell students to memorize as much as they can. Now hide the lyrics. Play the song while students write down as many song lyrics as they can, with the challenge of writing the chorus in full by the end. Next, play the song again and let students have one more chance to write down as many words as they can. Let students get together in threes now and see how much more they can piece together. Finally, show the lyrics so that everyone can see what they missed.

Take song two this time and give students a jigsaw puzzle to do with the lyrics. Play the song while students put the lines in order on their tables, in small groups. Tell students they will only hear the music once, so they should focus and work as fast as possible.

Stop the activity before, while it is still interesting. Every group doesn’t need to finish. Only play the song once unless you see that everyone is miles away from finishing the task after one playing.

For the third song, have students listen to it and note down every verb they hear, regardless of the tense. Compare notes at the end.

Continue with this for as long as it engages students, but stop before they have had enough.

Count up the points. If there is a big divide in the scores, make one of the best students a representative, so prevent them from answering everything! It’s not fun being thrashed at a game! It’s only interesting if the scores are close.

Discuss lyrics with students. What is more important in the song, the lyrics, or the music? Are there any songs with stupid lyrics that students love anyway, just for the music? Do students identify emotionally with any lyrics?

Students prepare for a general song quiz, write questions for homework, or take ten minutes of class time to do this. Questions can be on topics the students choose, but give them ideas such as naming band members, singers’ names, titles of hits, the year, translating the line of a song, or name that tune.

You might find interest in performing parts of songs if students sing in groups. Don’t make this obligatory. Groups could prepare parts of other hits for a “name the song” contest. Then, integrate them into the general song quiz mentioned just above.

Feedback on teaching with songs

How do these song ideas work for you and your teens? I’d love to hear from you. Ask any questions in the comments box below; I’ll be sure to reply to you.

Great resources for teaching with songs

For lots of great ideas to teach English to teens and adults, and make it fun, check this ESL activities book in paperback and an instant PDF download from me.

2 thoughts on “Teaching with songs: Teens”