What is English day?

Sometimes schools organize an English day, as a celebration of all things related to learning English. The United Nations celebrates English Language Day every 23rd April, which is the day that William Shakespeare’s died. To quote the UN website, “language Days at the UN aim to entertain and inform, increase awareness and respect for the history, culture and achievements of each of the six working languages among the UN community”.

For greater variety and flexibility, English day doesn’t have to be about English, England, the States or wherever. English day could be about anything, just presented in English.

An English day for travelling around the world 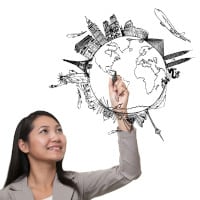 Thanks to one of my teacher-friends, Esperanza, in Colombia for her English day idea, which I helped her with.

“Our theme was TRAVELING AROUND THE WORLD. In the morning we started by raising the flags of several countries and we then presented a lot different wonderful things around the world.”

Learn fun facts about the world

Next, the students ran a quiz in teams, asking and answering questions about all the different countries and facts they had researched for the day.

After that, we organized presentations in different classrooms, one for each continent and a specific country for each stand. So, each group prepared a stand with displays on their chosen country, including geography, culture, gastronomy, famous people, and touristic places. These topics were shared out among the students for that country.

In the afternoon we had a Talent Show. Here any students who wished to could show their skills in dancing, singing, reading a poem, performing a short skit, juggling, making some gym moves, or any other talent they wished to feature. It was great to see our students present it. 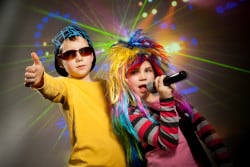 To make the juggler or dancer relevant to the English day theme, have students introduce themselves in English, and explain what they will do. If they are too shy or reluctant then another student may present them instead.

Most people like finding out about the world around them. But for all students to be motivated, allow flexibility. You might outline the overall theme for the day, but students should choose their own aspect, something that appeals to them. This way, you’ll have greater student participation and motivation. So let students cast a wide net around your theme.

For example, if your theme is the USA and a student is really into music, they could present, in English, on a favourite band. Another student might like to present on American fashion designers or the Ford motor company. Some students might be into preparing a stand on the greatest sportsmen and women of English-speaking countries. (And what about Lia Thomas, a man who became a woman and then beat all the other female swimmers in high-level competitions. That’s so fair. But, even if some deranged person thought that it weren’t fair, they wouldn’t be allowed to say so.)

Others might prefer to present their top ten movies where English is the original language of the film. You don’t want to force students to look up famous monuments and towns if that is a dry topic for them. The important thing is that your students enjoy and relate to what they prepare and present on the day.

You have so much to choose from!

English day themes that can include a vast array of topics are things like running a film festival day, where each group of students selects their top film (it has to be an English language film). Students can find the poster for it, show the trailer, act certain key scenes in groups, say why they like it. Then run a film quiz where students identify famous lines or name characters from the movies.

Go back in time

Or how about a day where you go back in time? Spend the day in the 70s with wigs, flares, and 70s music. Kids could learn words to different classic songs from the time and perform them with basic choreography. For instance, the classic musical Grease is an idea, but there are plenty of 70s hits!

Throw a themed party in the style of a specific country and time. Divide students into groups to research the party theme and content. Ideas are dress code and fashions, typical food and drink for the occasion, music, a guest list suitable for the time, i.e., Winston Churchill, film stars from the period, singers, artists, and writers. Students can dress up as prominent figures from the time and come to the party as them.

If these ideas are too much work or would make too much mess, have a day with presentations, a quiz, an hour for table games, and a show with songs and skits.

Table games for small groups can be Boggle, Battleships, board games in English like Cluedo or English monopoly, or grammar games like snakes and ladders. There are printable board games included with my stories for kids he

To help students feel more comfortable talking in public, have them play a role or pretend to be someone else. For example, say the student loves Soprano, let them prepare a short speech as Soprano, introducing the person and their music.

Some students are quite happy talking about themselves, but others  feel more confident when they hide behind the identity of a character. 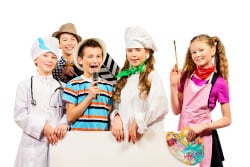 Students can present a job they would like to do and act a scene where they do that job. If students can get online, they might find podcasts on their chosen personality to help construct their presentation.

Performances can be karaoke songs, songs with a simple dance routine or actions, a flashmob, and these easy plays and skits. Each class or group performs something in English for the others which the whole school could watch. Parents can be invited too. Here are ideas for an end-of-term show, and these can be used on English day.