English show ideas with a big class of 60 kids 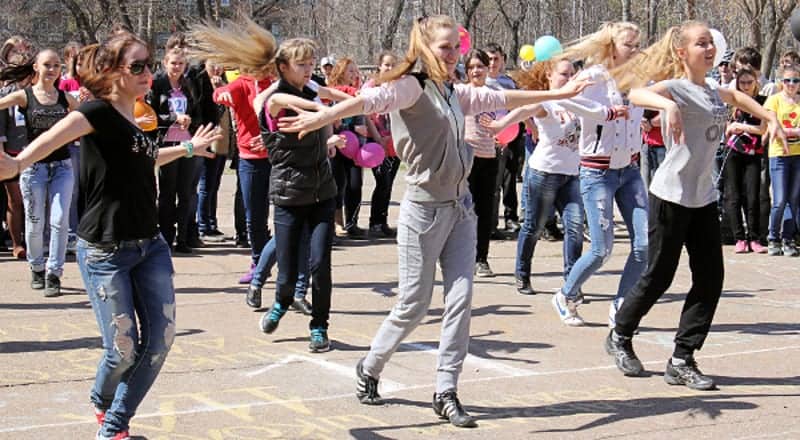 In a bit of a panic, a teacher asked me how to handle her school director’s request to produce an English show with 60 kids. The director wanted all the kids to be involved together in a big finale.

The solution could be to do a flashmob. To make it relevant to an English show, choose a song with easy lyrics and have all kids sing it along with their dance or flashmob actions. As for the choice of music, make it relevant to your student’s age. That said, anything by ABBA always goes down well and has the advantage of never being too vulgar. Waterloo and Mamma Mia are great choices. Mamma Mia is good because it goes on forever, and the chorus repeats often. Even your weakest students will be able to learn the chorus to that!

Music ideas for a flashmob

How about Greased Lightning from Grease? Or check out “I like to be in America” from West Side Story. One advantage of vintage music is that it’s “classic” – it’s survived the test of time, and it’s pretty good stuff that appeals to pretty much everyone. In contrast, the latest teen star might be loved by half your class and loathed by the other half. Or worse, you might pick a band your students see as really uncool unless you are 6-years-old.

The easiest thing is to learn one routine and repeat it until the end of the song. If possible, include actions that demonstrate the meaning of the song. First, have a group of ten students come on and perform the routine. Then, gradually, they are joined by all the rest until all 60 are performing—those watching sing the words all the way through until they join in.

Start by rehearsing the moves in slow-motion, without music. Kids must be silent for this phase. You do the actions, describing them in English as you go. They copy—for example, arms out, arms up, twist, twist, right leg forward, etc. At least in this learning phase, your students are getting some vocabulary practise with moves and body parts. As you speed up, leave out some of the commands. Rehearse in short chunks. Do ten minutes at a time each lesson. That way, your students won’t get bored.

You can’t perform a play for an English show; excuse me while I die of boredom just waiting for 60 students to take a turn at saying something! On the other hand, you might be able to have groups of students performing skits in groups. Then, start and finish the show with a flashmob involving everyone.

1. For those who hate dancing, give them a percussion instrument to play instead. It can be a tin of almonds to shake; it doesn’t have to be a drum kit. If someone says they hate the music, get them involved in stage decorations, props, or making programmes in English instead.

2. Any students who have special talents, like dancing, gymnastics, juggling, whatever, could add their speciality to the show while the others carry on with the routine.

Watch a few flashmob vids for inspiration, but watch out; they are addictive. Instead, have a few ideas of your own and then ask your class for ideas. If your students participate in constructing the flashmob, they will be more motivated, and it will be their creative project, not yours.

Helpful posts for an English show

Check out these blog posts with helpful ideas on preparing for an end of term show.

Preparing a performance with 4 to 6-year-old children

Tips for an end of term show