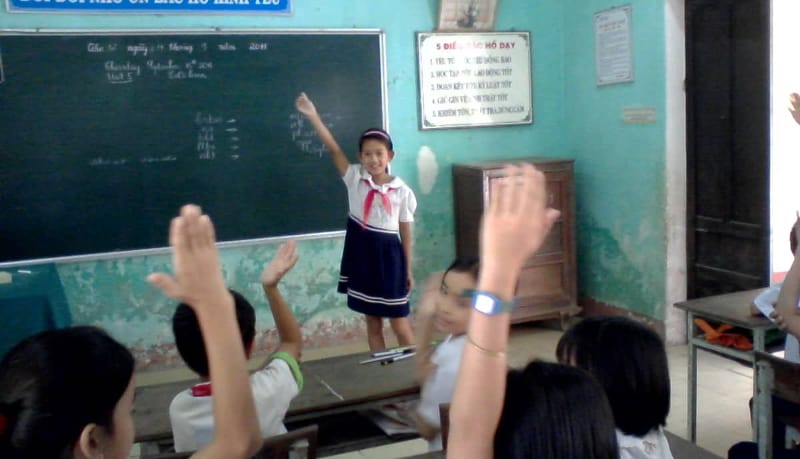 Motivating children to learn can be a challenge. I am sure you have all been there. You are standing in front of a class of glassy-eyed children or, worse, students who are just plain ignoring you. How can you get them interested? One sure-fire way to motivate students to do the task is to offer them small prizes or treats. Oh yes! You will have a class full of highly motivated, participating children. In addition, they might even learn something from the activity.

However, by giving the children treats, you’ll have an empty pocketbook and a class full of students who are only motivated by the material prize, not because they want to learn. There are many other ways to proceed without keeping a stash of “prizes” in your classroom.

Be More Than Just a Teacher

No matter your class demographics, there is one sure way to motivate: Get students interested in you as their teacher. You are not just a teacher, but a person too. Sometimes children tend to have the mentality that teachers are just teachers. This is because they exist in school and nowhere else.

On the other hand, if you let them see you as a person and not just a teacher, you might see a change in how they react to your class activities. If they like you, they will respect the class and be more motivated to make an effort. Of course, that is so much easier said than done. Here are some ideas to show your human side.

Think back to what classes you liked best and why. If the teacher was bored and didn’t make the subject interesting, pupils often didn’t like the class either. To keep yourself motivated, use teaching methods you are excited about. If you’re not excited and motivated about the activities you have planned for your students, it’s time to get some new ones.

Don’t be afraid to talk about your interests outside of school. Look for commonalities between you and your students and capitalize on them. For example, if you like the same types of music, then work on some of the lyrics. Of course, if the words aren’t in English, you can translate them and play games with the lyrics. Have fun! Some teachers frown upon playing the clown and having fun because they think it is time-wasting and that it is not their role to be an entertainer. However, it can make the children curious and wonder what you will be up to next. If it is not in your personality to be a big kid, you cannot fake it, which is OK. Your classes will still be enjoyable if you use fun games and ideas.

However, if you are a big kid at heart, you will find that joining in, playing with the children, and generally acting up and being enthusiastic will come naturally to you and is all part of the fun of teaching. But, you aren’t clowning around for the sake of it, you are creating a happy learning environment, and this alone can motivate your students. If pupils can laugh with you, and if they LIKE you, they’ll be interested in what you’re doing up there in front of the class.

When you’re frustrated with your class because they don’t seem interested, it’s easy to forget that you need to keep encouraging and stay positive even when they do something small. Remember that, unfortunately, the number one way to demotivate children is to have a negative or neutral attitude. If the children do not feel encouraged, they will not feel motivated to learn.

Here’s an anecdote to illustrate this demotivation from my niece. She is studying at law school, where they never give you any good marks but instead deduct points for mistakes. The result is always a negative score!

Think back to when you were in school. Did you like to sit at a desk and listen to the teacher drone on and on. This type of passive learning is BORING and demotivating. Active learning doesn’t mean the children need to be physically active throughout the class period – it just means that you design your class period around having them participate in the learning process. There are lots of things you can do to liven up your lessons:

Implement games that have the same outcome that you might have them reach by doing a worksheet.  For example, if you might normally give them a worksheet to write the correct verb next to the picture illustrating the action, have them instead practice their verbs by doing the action for the word you say or the word on a card that you hold up.  Likewise, you could do the action and have them write down the word.  You may access free samples of fun classroom games in the resource box below.

When you play games, you can use points and competition as a motivator, but not for kids under six who may find the competition too stressful.  For them, just playing the game is motivating enough.  You can also sometimes award extra credit, but use it sparingly so that it remains “extra” and a special reward.  Also if you use it too much, children can have so much extra credit that it sways the actual grades too much.

Movement is a vital component to motivating children.  The best way to prevent children from zoning out is to get them up out of their seats at least once each class period.  Even if you require them to come up to you instead of you going to them for help, the movement can help get them out of the trance that they sometimes get from sitting in one spot too long.

Grouping the children for study projects and activities helps as well.  If you can, let them move the desks around or sit on the floor to change things up as well.  Many games involve movement without the children needing to leave their seats, such as miming, moving certain body parts and passing things around as part of a game or race.  Therefore even teachers with large classes and no space to move can use this technique, albeit to a more limited degree.

Get Their Hands “Dirty”

Well, not literally, but the more hands-on activities you can do, the better they will learn and the more likely they will stay interested.  If you’re talking about the words to describe fruit, have each student bring in a piece of fruit and use the fruits in games.  It is much more motivating and effective to be handling objects and pictures than copying down lists of words from the board.

If you are discussing how to put a sentence together, have them construct their own (alone or with a partner) and write them on the board.  You can also intentionally make mistakes to encourage them to look for the “right” way.  However, if you do this, you should warn everyone so that they are on the lookout for your deliberate errors. Otherwise you could do more harm than good.

Stick to a Schedule

Creating a schedule helps students know what to expect in the class and stay organized. In addition, a plan will lower the frustration level of children who struggle in school.  It is tough for frustrated children to stay motivated.  But, if they know that every Friday is a vocabulary quiz, they won’t have to wonder on Thursday if they were supposed to study last night. If they have weekly assignments due every Wednesday, you don’t have to keep reminding them about it.  Post the schedule in the room so children may refer to it whenever they like.

You can also have a mini-schedule that outlines how each class period will go.  For example, vocabulary exercises and games for 15 minutes and then the main activity.  That said, I don’t display my lesson plan because I like to be spontaneous and follow interest where it arises, rather than sticking to a rigid schedule.

Variety is the Spice of Life!

With that all said, it’s also essential to change things up within the schedule. For example, if you spend the first 10 or 15 minutes each day doing vocabulary activities, make sure you vary these so they don’t get boring and predictable. If you see that one class doesn’t respond to an activity, avoid it in the future and stick to the ones they like. It’s also important to realize that some groups will be motivated by certain games that the next group will detest. For example, one group might like role-playing while another group would rather have a tooth pulled.

Another way to create variety is to keep changing the pace. For example, play a game that wakes the children up and follow it with a calm game so that the students do not get too excited. Then play a fast game so the children do not start dreaming or get restless and misbehave.

If you spend long periods with a mixed ability class and split your teaching time between groups, then the following ideas may help when the children have some free or unsupervised time in your lesson. Some kids will misbehave the minute the teacher they can.

Therefore, get a variety of activities like educational board games, crossword puzzles, sudoku puzzles, and art projects. Anything thought-provoking and also fun would be appropriate. Put kids in teams to be the first to complete a series of tasks.

Try also suitable English reading material such as comics or teenage magazines about cars, music, and topics appropriate for the age of your pupils. If discipline is a problem, you’ll have no choice but to have everyone work individually at their desks in silence.

This idea motivates younger classes of children up to age 12, but it can work with all ages. Plan an end-of-the-term program so the children can show off what they’ve learned to their parents and anyone else who attends the program. You can do it right in the classroom and have the children play games, recite poems, whatever you can come up with to have them showcase what they’ve learned to their parents.

Because this strategy is so successful, you can even put on two performances. Do one in assembly for the whole school, and another for parents, perhaps in the evening or immediately after school. You should find that your head of school is open to this as it allows them to show off too!

So, there you have it. There are many ways you can motivate your students to WANT to learn and pay attention without bribing them with tangible gifts that become more important to them than learning the material.

ABOUT THE AUTHOR: Shelley Vernon has inspired thousands of ESL teachers with her games. Get her free games now to find out how to enjoy your time in class more, make your teaching fun so your students stay motivated. Get the games in download from Shelley on the shop links below,  or in paperback or Kindle !