Hetty and the Lion Part Three

Welcome back.  This is the third in this series of ESL games for preschool including a story and activities to teach preschool children English.  If you have missed the first two parts, here they are:

Part one – Lesson plan with games to teach fruit

Here are some ESL games for preschool which you can use for revision and for more speaking practice as the children become more confident with the vocabulary and language.

If you are fortunate enough to have the real fruits easily available then bring them in and play a blindfold tasting game.  Be careful to wash the fruits and your hands carefully beforehand and cut the fruits into small pieces.  You can give the children the black and white pictures to be colouring in while you are doing that, or you can have the fruits pre-prepared – which would actually be a lot better.  Blindfold one child and feed them a piece of fruit on a spoon.  The child must guess what fruit it is.   This is only suitable for small groups of course otherwise you would need an assistant to help you get through the children faster.

Again if you are fortunate to have the facilities to do this making up a real fruit salad is always a popular activity with the children.  Make sure there is plenty of naming of the fruits as you put them in the bowl and eat them afterwards.
You could play a game once the fruit salad is made where each time a child has a go they are allowed a spoon from the salad bowl.  You will have to serve them yourself in a separate dish as these days everybody is paranoid about germs, and you can’t be too careful with other people’s children.

First have the children chant or sing these simple words: Bananas oranges apples and pears – four times in a row.  The trick is to say these four lines in a sing-song type way, with the intonation going up at the end of the first and third lines and down at the end of the second and in particular the fourth line.  It is better if you can make up a simple tune, or use a tune that you already know and put these words to it.

If you have a big group you can cut the chant down to two lines and have a little chasing session every two lines instead of every four to let more people have a go.

Now you are ready to spend another 3-4 minutes on the game.  When you stop the music hold up a picture card of one of the food items from the story.  Count the children in and ask the question with them.  If the children can do it on their own so much the better, then you can answer them with, “yes I would”, or “no thank you”.

This activity is something to play once the children are very familiar with the story and are ready to start using more language than just naming individual words.

Sit your group down on the floor and tell them to pretend to be in a restaurant where they are to order.  One of the children is a waiter.  If possible give them a tea towel and tray as props.  The waiter comes up to the group and asks them, “would you like some milk”, “oh yes please say the group”, and the waiter goes off, selects the correct flashcard and brings it back to the table.  Now swap the waiter over and let another child have a go.  If possible have the real fruits available for the waiter to take over to the table. 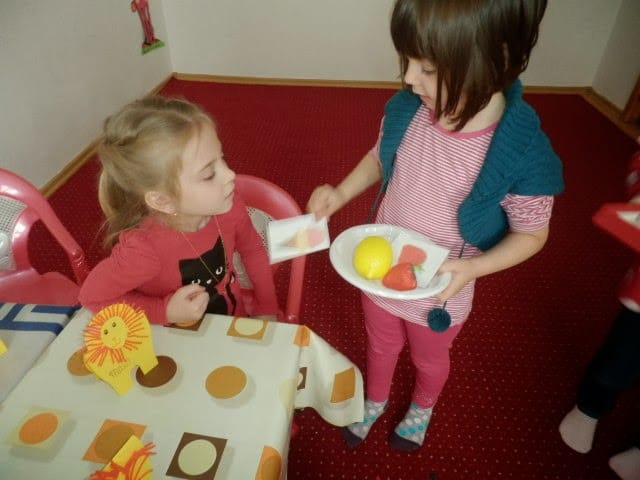 Divide your children in to two teams and give each child a picture flashcard of a fruit or food item that he or she must buy.  At the other end of the room are two shops, one for each team.  Place your two best children in each of the shops.  On go the first two children from each team run down to the shop and the shop assistant must ask them what they would like for example, “would you like some bananas?”  The child doing the shopping must say, “oh yes please” if his or her picture is of bananas and “no thank you” if it is of any other item.

You can vary how you play with this idea.  For example you could allow the shop assistant to see the flashcard so that all the shopping is done very quickly, and this is the best way with the three year olds anyway.  Or you could allow the shop assistant three guesses, and if none of those guesses are of the picture in the flashcard then the shopper has to go back to his or her team empty handed. 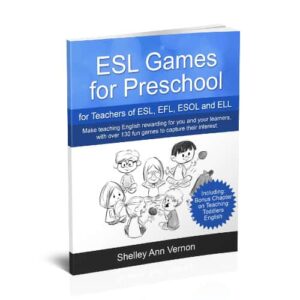 There are, of course, many more ideas in the book of preschool games which accompanies the stories, and I hope that, if you have found this series of emails with pre-story games and flashcards, a story and post-story ideas, that you will see how much fun and how satisfying your teaching can be, and that you will get the whole package of games with all ten stories.

Save massively on lesson preparation time

What a difference to this teacher’s preparation!

‘Just wanted to let you know that I started using your course last Monday – what a difference it has made to my preparation! Instead of absolutely dreading the preparation, I actually enjoy it now!!! I have just prepared the second lesson for tomorrow morning and am actually looking forward to going there.I feel much more confident now.’

Do let me know how you get along with the esl games for preschool and story and, if you are on my mailing list, I shall email you again soon with more ideas to use after story telling, and particularly with more speaking ideas.

Order the full teaching kit of ten stories below.

Included with the full resource

P.S. Order the esl games for preschool today to be on the safe side in case the price goes up soon: Order today at great value price