Pronunciation activities for teens and adults 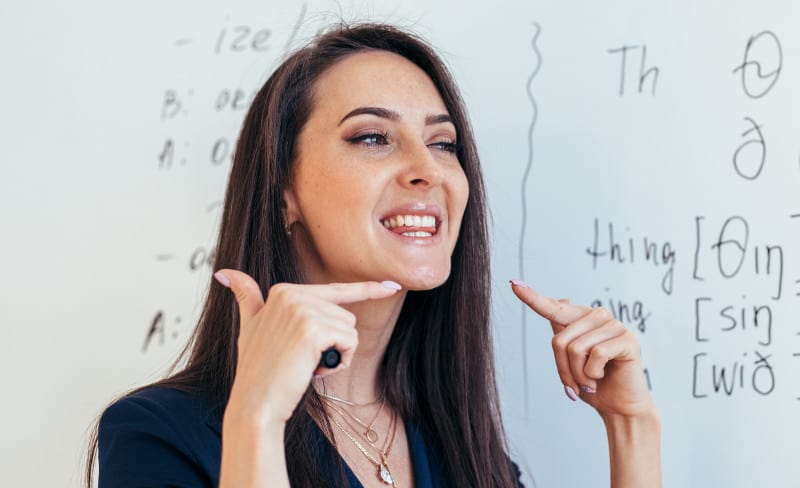 This post has three different pronunciation activities for teens and adults. Phonetics and phonology can be instrumental when teaching pronunciation. However, if you find the sight of the phonetic chart overwhelming, just imagine how your students feel. But don’t panic; just take it one sound at a time. That said, you might not even need to teach all the sounds, only those which challenge your students.

As ESL teacher Elena Baito told me: “I’m experimenting with recognizing sounds using songs. First, I present a new sound, such as the unvoiced interdental sound. Then, students look at the phonetic transcription of this sound in the chart and try to practise it. Finally, they write the phonetic symbol in their copybook.

Moving on, we listen to a song while following the lyrics on the board. For example, “Thunder” by Imagine Dragons is relevant to my students since they have trouble with the ‘th’ sound. So first, I explain that they have to find all the words containing the unvoiced interdental sound in the song. After that, we write all the words in the copybook and repeat them. We also sing together, and I love singing.” If you want to use the song Thunder, you’ll find it on YouTube or your countries’ equivalent. I found the video weird, but it’s a great song choice, given the number of times the word thunder is repeated!

Ask your students to find a song for you to avoid spending your evening watching inane videos online!

After doing Elena’s work above, I suggest continuing with a dialogue. Students write a conversation in pairs. This script can be on any topic as long as the target sound is used in every sentence. Next, tell the class they will listen to everyone’s dialogues and vote on them. Indeed, explicitly asking for feedback gives everyone a reason to listen to the exchanges. Students can vote on the funniest, most innovative, saddest, outrageous, and even most boring! Then, listen to the best ones again and have students raise an arm whenever the target sound is said.

Drill phonemes and pronunciation with games

Use all the vocabulary drill games in my book ESL Activities and Games for Teens and Adults to drill phonemes and pronunciation. First, use the listening games with words that contain the target sound. Then use those same words in the speaking drill games. Work with one new sound at a time. That’s enough of a challenge for students. However, when you revise sounds, work with several at once.

Put students in groups of four to play Happy Families with four phonemes. Student A copies a phoneme onto four cards and draws a father, mother, son, and daughter. For the ‘th’ phoneme, this could be the Thunder family. Students B, C, and D do the same, each with a different phoneme. Next, students shuffle and deal out their pack of cards. And then, each student takes a turn asking any other student for a family member. For example, do you have Mr. Thunder? The first to have a complete family is the winner. BUT the game aims to work on excellent pronunciation, not just win the cards!

2 thoughts on “Pronunciation activities for teens and adults”